A gold welcome banner is draped across a barbed-wire fence marking the boundaries of a Darwin quarantine facility.

Hardly the heroes welcome a gold medallist would have expected in the wake of any other Olympic Games cycle. Instead it is a sobering reality for Australia's champions of the global pandemic we endure.

The Tokyo Olympics were launched against a backdrop of civil resistance in a nation gripped by a state of emergency. Yet in some way they were the Games the world needed.

Every four years - five this time around - we question the relevance of the Olympics. Host cities spend billions which, many say, can surely be spent better elsewhere. Yet for 16 days of competition, we are inspired.

For a nation like our own, when so many are confined to their homes as governments look to curb the threat of more COVID-19 outbreaks, the Olympics have been an outlet.

A chance to be swept up in the emotion of Emma McKeon becoming Australia's greatest Olympian, Simone Biles proving one's wellbeing means more than appealing to the masses, Peter Bol's unlikely rise from a child in a country torn by a civil war to an Australian hero.

Australia has celebrated one of its finest returns on the medal tally in Olympic history. But when the curtain is drawn on the final event in Tokyo come Sunday evening, the shine of gold, silver and bronze will fade.

Instead, we will be left with tales of elation, humility and heartbreak.

We will be left with Italian high jumper Gianmarco Tamberi's cry after he and Qatari great Mutaz Essa Barshim decided to share a gold medal.

Both Barshim, 30, and the 29-year-old Tamberi cleared 2.37 metres but after they failed three times at 2.39, they entered a conversation with an Olympic official, who first offered them a jump-off to decide the matter.

"Can we have two golds?", Barshim asked. The official nodded, the two athletes locked eyes, clasped hands and cheered in a tearful embrace. One can say what they please about letting athletes decide to share a gold medal, but their hug was one the world needed.

For every triumph, there have been more tales of heartbreak. When Australian featherweight boxer Skye Nicolson dropped to her knees in tears after her gold medal dream ended, a nation wept with her.

When American gymnastics superstar Biles walked away from a chance to defend her gold medal, we understood. The 24-year-old has shown it is okay to not be okay.

When Australian distance runner Patrick Tiernan dragged himself back to his feet after collapsing twice on the final lap of the men's 10,000 metre race, we willed him across the finish line. 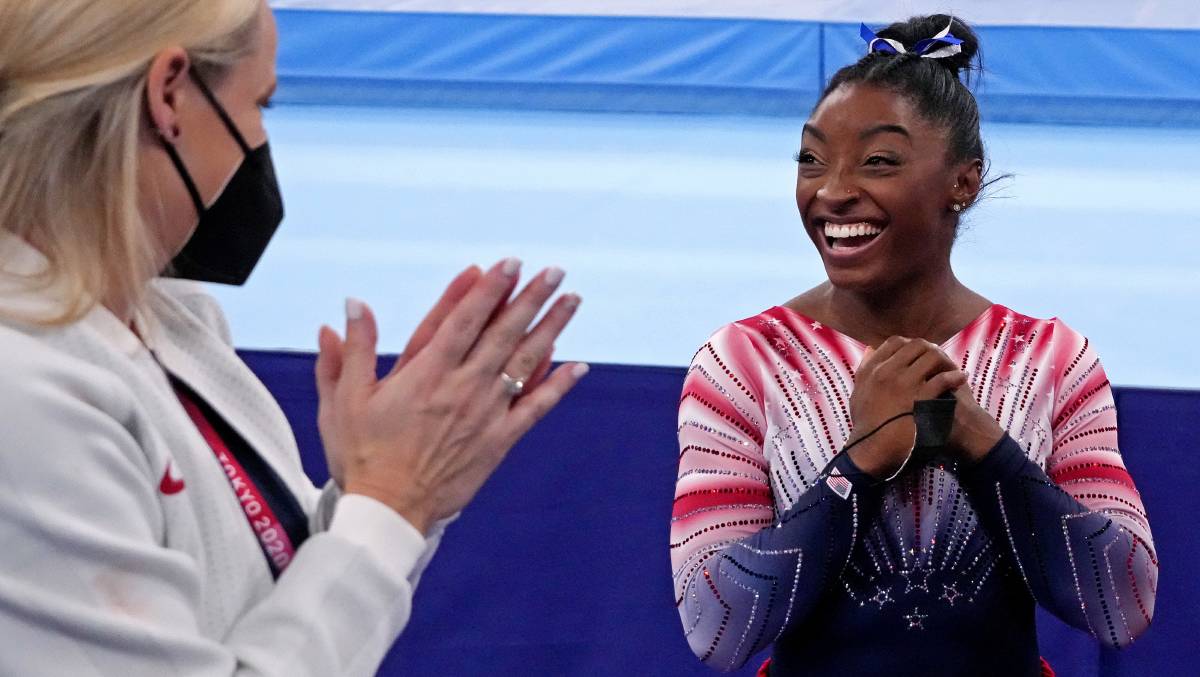 Simone Biles made a statement which will add to her lasting legacy. Picture: AAP

Tiernan, in considerable distress, crashed to the floor twice, including a heavy fall in the final straight of the 25th lap, after he hit the wall on a humid Tokyo night. He was rightly lauded as an inspiration.

"It doesn't feel anything heroic to me," Tiernan said in the wake of the race.

"I just fell a little short of where I wanted to be and haven't had a chance to process any of that. I'll decompress over the next couple of days, but I'm glad it's struck a chord with a few people."

More than a few. Much is made of the Olympic spirit, yet few can aptly describe the intangible. You just know it when you see it, like when teenage skateboarders pick each other up after falling, or when a group of Fijian rugby players win gold after hitching a ride to Tokyo on a cargo flight.

Take the final event of the men's decathlon. An unheralded 21-year-old named Ash Moloney was on the verge of Australia's first medal in the event, history for a nation which had never finished better than sixth. As a group of exhausted men collapsed at the finish line to mark the end of 10 gruelling events in two days, you would be excused for thinking another Australian, Cedric Dubler, was celebrating his own medal win. But no, he had sacrificed his own hopes in the race, instead setting a pace to help his mate win bronze.

"I could hear his voice bouncing in my cranium like a bat out of hell," Moloney said.

"[I was] just putting one foot in front of the other. I started hitting a wall at 800 metres and I was a bit concerned but I was like, 'just stick to Cedric. Don't let him get too far away.' I executed and he screamed like a ..." As has Japan's seemingly audacious commitment to staging the Games. COVID-19 cases have surged around the country. Many were almost certain events would be cancelled, some thought the Olympics would be scrapped altogether. But they've pulled it off.

Some Olympians earn a fortune. Most, like sponsorless supermarket employee Riley Day, do not. But their desire to be the best in the world never wanes.

In the pool, McKeon has done just that. The 27-year-old ends the Tokyo Games with seven medals - no woman, in any sport, at any Olympics, had previously won more than six. Much like a meeting between two titans of the pool in Ariarne Titmus and Katie Ledecky, her races became compulsory viewing in Tokyo.

Titmus became a rockstar, so too her coach Dean Boxall. The sight of his Ultimate Warrioresque celebration after Titmus' 400m freestyle triumph, flanked by a polite Japanese lady who didn't know how to contain it, brought enough joy to a nation to suggest he may never have to buy another beer.

"I lost it. I think I went outside my body. I just lost it. That's a moment of being with this girl for five years and having a dream together," Boxall said. "I bleed with my athletes. When they leave the pool deck with me, they go and start the recovery process and go home. I don't ... I go home and dream for them."

The Olympics is a place for dreamers. For humble athletes bereft of big money deals can become superstars on a grand stage. For unknowns like Bol to capture the hearts of a nation. Bol was sure of one thing when he arrived at Tokyo's Olympic Stadium for his 800m final. Not which men would pip him by less than a second to get on the podium, but "the whole of Australia was watching".

He knew he had "inspired the whole nation, and that's what it's all about". Bol was four when his family escaped a civil war which would be waged in Sudan for more than 20 years. They arrived in Egypt in 1998. Four years later, they were in Australia.

"To Australia, I'm thankful to everyone in Australia, because we're just human at the end of the day," Bol said.

"We inspired the whole nation and that's the goal."

Our journalists work hard to provide local, up-to-date news to the community. This is how you can continue to access our trusted content:

This story The Olympic Games we needed first appeared on The Canberra Times.

Discuss "The Olympic Games we needed"

Discuss "The Olympic Games we needed"