It's been more than two decades since Michael Connelly worked in newspapers but the best-selling crime author says he remains a journalist at heart.

His books are lauded for their realism, for their attention to detail, for involving issues of the time and place.

"I want to tell an interesting story, for the books to be entertaining, but they have all been very contemporary," he says from his home in Los Angeles.

"I've always tried to reflect what's going on in the moment I'm writing, I'm not saying all writers should do that, some writers put their books in a social vacuum, but that's not me.

"I'm still a journalist, even though I'm writing fiction, I'm trying to be as realistic as possible."

And so his latest novel, his 37th, The Dark Hours, is planted firmly in the pandemic. It's the fourth installment of the Renee Ballard series which began in 2017 with The Late Show. Here the LAPD detective works her cases amid mentions of the Coronavirus, from colleagues who won't wear masks, to who has had the vaccine. There's also a thread of disillusionment among members of the police force, coming off the uprising post the murder of George Floyd in mid 2020.

Connelly worked as a crime reporter, first in Florida - where he was nominated for a Pulitzer Prize - and then in Los Angeles, where he moved with his wife Linda in 1987 and has always worked hard at developing contacts.

He says he has many friends amongst the LAPD, they consult on his books and the television and films which have stemmed from them. He doesn't envy their place in today's world but he is appreciative of their help. 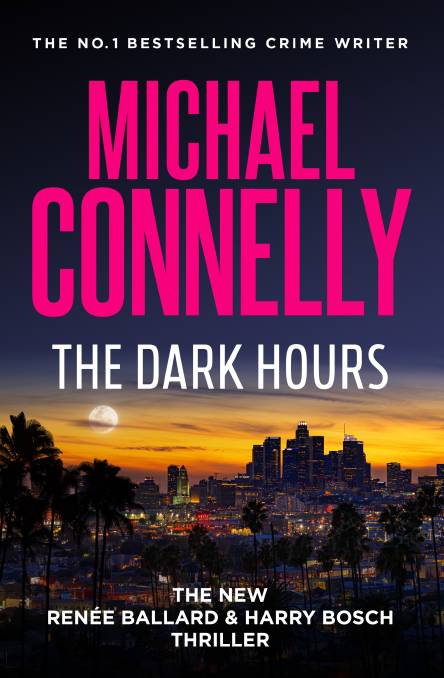 "I'm no creative genius," he says. "If I have questions I'll go straight to the source, we'll bounce questions off each other, they'll feed me ideas."

He first introduced Harry Bosch in his debut novel The Black Echo in 1992. Bosch, for all his cantankerousness, is one of the most enduring, and perhaps endearing, literary characters of the modern age.

While Bosch is an amalgamation of many detectives he has known over the years, Renee Ballard is based on one real-life woman, LAPD detective Mitzi Roberts, whom Connelly has known for 15 years.

"Mitzi would tell me stories about her career, her life, and how being a woman, being a detective, would present obstacles she had to overcome."

While he introduced Ballard in The Late Show, the other installments Dark Sacred Night (2018) and The Night Fire (2019) featured Bosch. In The Dark Hours, Bosch is back but you sense this is something of a changeover.

"I introduced Ballard in her own book, The Late Show, knowing full well that she was the one Bosch would eventually pass the baton to," he says.

"After that introduction, came the meeting of the minds in Dark Sacred Night and the continuation in The Night Fire. They worked together - realistically, I hope - on cases and fed off each other's differences at the same time their shared mission in life kept them together. To me, these two books are about the passing of that baton.

"And in The Dark Hours we see Ballard move to the front. It is clearly her book. Bosch is there, of course, but he is a step back now. He, in a way, is support staff. He is the professor realising his student knows the lesson. The parent pushing the baby out of the nest.

"All of these things came to mind as I wrote this latest novel. Ballard still needs Bosch. Not to be the teacher but to be the one who understands their joint mission and to be there when the darkness follows her. And Bosch needs Ballard to stay relevant to himself and to help him complete the mission."

This idea of staying relevant is something Connelly thinks about. He turned 65 in July, he's wondering if he should be thinking about retirement or whether he should just slow down - his 37 books have come in 30 years.

"Working in television, everyone is younger than me, but I still feel pretty confident that I am contributing in a significant way even though television is a younger person's sport. I think there is a growing acknowledgement that older people have something to contribute."

Bosch is 71 in the books now. In The Black Echo he was in his early 40s. Connelly always wanted him to age in real time.

"I write fiction but I write in real world terms. As the days and years go by in real life, so too with my characters. In other words, they age in real time. They evolve as the world does.

"This is all well and good but then I got very, very lucky. Harry Bosch stuck around. The character stayed with me and seemed to stay with the readers as well.

"I wanted to write more, explore more about him and the feeling was that readers would come along for the ride. The only remote issue with that is that I started him off in 1992 at age 42 and I have been stuck with that ever since.

"Harry ages and as he has aged it became increasingly clear that I was bending the reality - the verisimilitude - that I cherished.

"So, to steer back onto course, I at first had him retire and work private investigations and volunteer work for a small police department. That was all good. But the character persisted in my creative mind. I was not through with him. I still had to do something to lengthen my time with him.

"That's where Renee Ballard came in. Much younger, thankfully, but with the same sense of mission as Harry Bosch."

Connelly has enjoyed watching Bosch come alive on the screen. The Amazon series Bosch, starring Titus Welliver as Bosch premiered in 2014, the seventh and final season finished filming in January. The series is available on Amazon Prime video here in Australia. A spin-off series involving actor Madison Lintz as Bosch's daughter Maddie is also in the works.

"There's something about seeing something you've written be interpreted in a different way, into a different medium, that is fascinating," he says.

He never expected Bosch would be so well liked, and long lived.

"When it comes down to it you're pretty much writing for yourself, you're writing the kind of book you would like to read.

"When it comes to the main characters, you want to, need to, like these characters, you could spend a year plus writing about this character every day, you'd better find things about him or her that you like and connect to because that's how you sustain your life, your professional life, that's what brings you back every day. From day one, I was writing someone I thought I could connect with.

"For it to happen to this extent, for this length, is pretty amazing and hard to put into words. "There's no way that when I first typed in the name Harry Bosch, probably about 1989, that I thought I would still be writing the next chapter of my 38th book and he's still there, that all these years later he's still sustaining in my imagination.

"Harry Bosch gets more fascinating as he gets older because he's not doing what is expected of him, which is, I guess, to sit on the deck and enjoy the sun and not worry about anything."

Perhaps the same could be said for Connelly himself.

This story How long does Harry Bosch have left? first appeared on The Canberra Times.