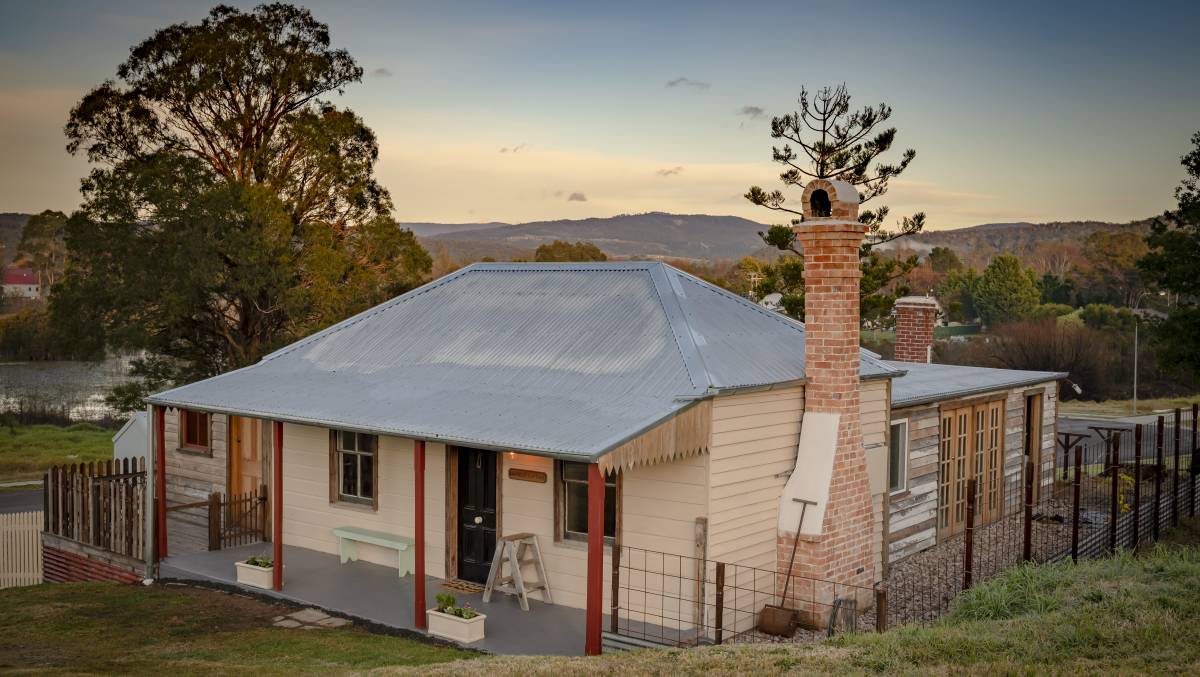 Deb and Mike Dunn had been looking for a new, special place to live for 10 years, when in 2017 they discovered and "fell in love with Pambula".

At the time they were living in the Macedon Ranges Shire and had started by looking at the Central Coast but discovering Pambula set them on an interesting restoration and renovation path and it has given them a special home.

A very rundown Baddeley Cottage was on the market and Deb flew up to have a look at it.

'It was so diabolical'

"It was so diabolical that I just eliminated. There were no words to describe how bad it was; there was water damage and termites had got in. A group of owners had sat on it for 14 years and it had been home to transient workers," Deb said.

"But four months later we bought it. In the first 12 months we thought the place would fall down," she said.

Deb is a town planner and had worked on a lot of other people's homes and said there were enough signs that there were treasures hidden underneath the rubble, dirt and more recent work on the home.

And it was the idea of giving new life to some of early European history that inspired Mike and Deb to take on the project.

There were no words to describe how bad it was; there was water damage and termites had got in.

"We knew there was pressed metal and historic timber floors but we also knew it was an enormous task," Deb said.

An unusual collection of buildings

"Unusually for a heritage place, it had more than two rooms and more than 80 per cent of it was historic buildings all joined together.

"It's less than 16 squares but 80 per cent of it dates back to the 19th century and that made it a fantastic challenge," she said.

That first year was a good opportunity to hit the research button, Deb said, reading about timber floors, pressed metal and how to preserve everything they could.

"The cottage had 20-30 layers of paint on parts of it and we looked for best practise. For anyone who wants to undertake this work there's learning out there and I must give a shout out to all the academics," Deb said.

On taking possession of the house, the plan was to strip out the layers but the first discovery was that 60 per cent of the house had been covered in asbestos which took months to get cleaned up.

We'd have some random person pull up, honk their horn, give us a thumbs up and yell out we were doing a great job. People were so encouraging, it really lifted us.

But what they discovered underneath were beautiful tongue and groove walls.

"That put a massive wind under our wings," Mick said.

"The house had a way of doing that. We'd heard rumours there was a shingle roof and it was intact," Deb said.

What they discovered was a roof of handmade timber shingles which had been frozen in time from 170 years ago after having a corrugated iron roof put over the top of it.

Now the shingles form part of the interior, giving a glimpse of the hard work that took place to make the roof all those years ago.

"Every time I look at those shingles, it just gives you chills," Deb said.

Mike called it a "fantasy land" but the question was how to preserve them. They found a way to do it and it was a massive part of the restoration. But the house had more to reveal and as the wall skins were removed they found the sides of packing crates from Massachusetts and London.

READ MORE: 41 years of teaching at Bega High - and this teacher attended as a student too

"The real challenge was to have a home not a museum but for the most part the treasures have remained exposed," Deb said.

"We worked with council's heritage advisor Trevor King, and Cecily Hancock and they were really practical."

But the project was so much bigger than they had imagined and so at age 57, Deb went back to school and became an owner/builder.

Over 18 months they had to work with a lot of specialist trades, working slowly as everything was complicated.

Deb said the electrician and plumber were working with them for months.

Tradies 'got the heritage' concept

They also found brickie Brendan O'Dwyer of Tathra who learnt how to mix the lime-based mortar needed for the Glaswegian fire bricks that make up the eye-catching chimney at the side of the house.

"He really wanted to learn. The people who stayed with us really got the heritage," Mike said.

Mike and Deb were determined to reuse and recycle as much as possible and did a lot of the boring labour-intensive work, including cleaning and sanding back all the old square nails, hundreds of them.

"We kept everything. We had a window sill that was rotten but I said 'we're not throwing it out'. We've cut out the rotten bits and it's in the house. With a bit of elbow grease you can recover anything," Deb said.

Skirting boards were made from old floorboards, wood was stripped back by hand and all the doors then had shellac varnish painted on them.

"But nothing was the right size and Greg Whitby - who was a massive help - gave Mike mentoring on how to extend the doors; only two haven't been touched," Deb said.

"There are two elements that are not original. We ran out of architraves and there was a place in Carp St, Bega where a builder was throwing out originals, which I stripped back by hand," Deb said.

And then there was the door from the Hotel Australasia, given to her by Neil Rankin.

Mike and Deb are full of praise for the locals who became involved in the project, like plumber Ivan Schneider who gave them some bathroom hardware and made copper pipes.

"We love him. He started way back and did the drainage," Deb said.

"Retired builder Jimmy Hughes was just a legend. We called him the inspector and he checked on all the work," Deb said.

"When we had the restumping done, it was out a little on one corner. He hung a couple of bags of sand off one end and over a couple of months it moved the quarter of an inch that was needed," Mike said.

This has been the most enriching thing we've ever done.

"When we sought advice, people gave it. The kindness we've been shown has been amazing," Deb said.

Inevitably there were days where the end seemed a long way away and things didn't go right.

"Then we'd have some random person pull up, honk their horn, give us a thumbs up and yell out we were doing a great job. People were so encouraging, it really lifted us," Mike said.

"Jimmy would rock up with a bag of passion fruit and take the tools away and sharpen them," Deb said.

"This has been the most enriching thing we've ever done," Deb said.

The cottage was the home of the Baddeley family who lived in Pambula and influenced just about every corner of civic life over more than a century. Patriarch Charles Baddeley arrived in the mid-19th century and established a large tannery that exported leather and employed hundreds.

"The genealogical people loved it. They were ferocious and Margaret Sly, the doggedness she has shown, we're indebted to her," Deb said.

Evidently Margaret has uncovered a whole other history prior to the Baddeley family's arrival which will be revealed during ABC's Restoration Australia at 7.40pm on Sunday, September 26.